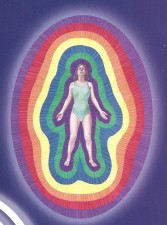 Layers of the Aura

Our Energy Field, or Auric Field has seven layers.  These layers correspond to the seven body chakras, which we explore in a later article.  For now, let’s look at the seven layers of the aura.  The first layer of the aura sits closest to the body, with each subsequent layer enveloping/surrounding the previous, but distinctly separate, outward to the seventh layer, which is the layer farthest from us.

Our aura extends outward from us to about the tip of our fingers if we raise our arm horizontally.  We will initially see the seventh layer of a person, and as we interact or communicate with them, we start to see the deeper layers.   Here is a list of the layers of the aura, from first through seventh, and their general associations.